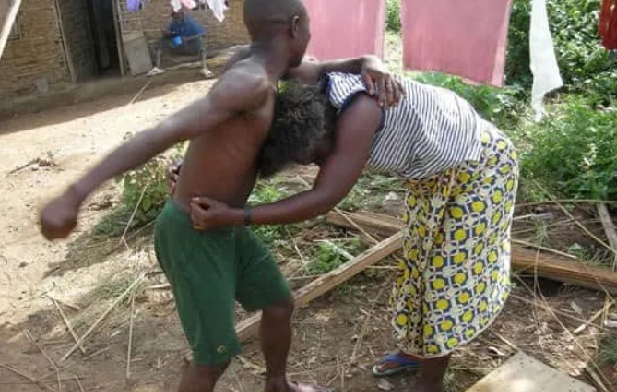 Mr. Olabode The Murder of Nurse Adaeze Blessing Finally Arraigned Before the Court

Our Correspondence who pleaded to remain anonymous revealed She had a misunderstanding with her husband and the man beat her up with iron rod.

The beating was so serious that She had ruptured uterus, rupture ovaries and torn ligament, The baby at birth following Emergency Ceasarean section had internal bleeding and died less than 1hour after birth.

This is Grossly unacceptable that women are majorly victims of domestic violence in our society.

What has the Nurse done to warrant this capital punishment.?

According to her colleagues we communicated with over this issue responded;

“I have know this lady for 17years+, she is an easy soul, she fends for her family (she is the bread winner) she just finished her post basic nursing program after almost 7yrs of basic midwifery. She is a hustler.”

“She loves this beast she called a husband so much, I remember her bragging to me that her son and husband are April born and that this her pregnancy to will be delivered in April, that she wants her kids and husband to share same month.”

She further said surprisingly she has never once mentioned that her husband beats her.

Domestic violence is a crime against humanity we call on all Authorities and Law Enforcement Agency to please give Justice to Nurse Anya.

We are aware even if Mr. Olabode oluwasanmi is sent to prison will it bring Adaeze back?

Say No to Domestic violence

Run for your life.

It was Reported that:

For killing his pregnant wife identified as Blessing, Fourthy seven (47) years old Seun Olabode has been arraigned before an Ondo State Magistrates’ Court sitting in Akure.

He was arrested by the police at the Oke Ogba area of Akure for allegedly killing the deceased by hitting her in the abdomen.

He was arraigned on one count charge of murder.

According to him, the court should remand defendant in police custody pending legal advice from the Directorate of Public Prosecutions.

Counsel to the defendant, Mr A. Ololike, did not oppose the remand application.

The presiding magistrate, Mr N. T. Aladejana, ordered that Oluwaseun be remanded in police custody pending legal advice from the DPP and adjourned the case till September 8, 2020, for mentioning.

We awaits September 8 for the latest Development.

55 thoughts on “Mr. Olabode The Murder of Nurse Adaeze Blessing Finally Arraigned Before the Court”